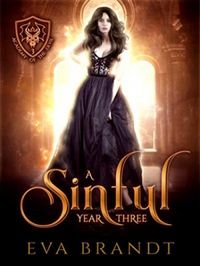 Academy of The Devil # 3

A Sinful Year Three (Academy of The Devil #3)

Some powers are beyond human control. Some secrets hold too much weight to be carried. Some sins cannot forever be contained. This year, secrets, sins, and power come togetherand the end will be upon us all.

Its my third year at The Academy of the Devil, and things finally seem to be falling into place. Ive reached a tentative agreement with my new lovers. My life is finally headed in the right direction.

Or so it seemsuntil he shows up.

They say he is an exchange student. They call him Lucian and cluster around him like flies drawn to honey. They are blind.

I know the truth. I can see his true identity in his eyes, in his smile, in the sinful power bubbling under his skin.
He is Lucifer, the Fallen One, the Brightest Star. Like a supernova, hes as beautiful as he is dangerous, and for some reason, he wants me to be his.

Theres just one problem with that. Callum, Stefan, Mikael, and Meph arent willing to hand me over to anyonenot even to one of the most powerful angels in the world.

Theres something hes hiding, some reason why he deems me specialand I want nothing to do with. But do I really have a choice? Can I really withstand the fire and the power of Lucifer himself?

Somehow, I doubt it, but Im certainly going to try.