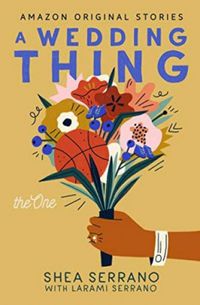 A hilarious story about a change in plansthe most harrowing, beautiful, and unforgettable day in the life of the #1 New York Times bestselling author of Basketball (and Other Things) and his miraculous wife.

Two days before Shea and Larami Serrano were to be married, four months into her pregnancy with twin boys, she went into labor. Stuck in a hospital room, fearing the worst, and dismantling a years worth of preparations in a matter of hoursthe couple decides that the show must go on. Told from Sheas and Laramis dual perspectives, this memoir shows the powerful bond that can arise from adversity, a sense of humor, and mutual trust.

Shea Serranos A Wedding Thing is part of The One, a collection of seven singularly true love stories of friendship, companionship, marriage, and moving on. Each piece can be read or listened to in a single sitting, with or without company.