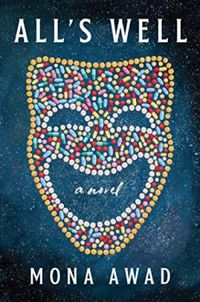 Miranda Fitchs life is a waking nightmare. The accident that ended her burgeoning acting career left her with excruciating, chronic back pain, a failed marriage, and a deepening dependence on painkillers. And now shes on the verge of losing her job as a college theater director. Determined to put on Shakespeares Alls Well That Ends Well, the play that promised, and cost, her everything, she faces a mutinous cast hellbent on staging Macbeth instead. Miranda sees her chance at redemption slip through her fingers.

Thats when she meets three strange benefactors who have an eerie knowledge of Mirandas past and a tantalizing promise for her future: one where the show goes on, her rebellious students get whats coming to them, and the invisible, doubted pain thats kept her from the spotlight is made known.

With prose Margaret Atwood has described as no punches pulled, no hilarities dodged...genius, Mona Awad has concocted her most potent, subversive novel yet. Alls Well is the story of a woman at her breaking point and a formidable, piercingly funny indictment of our collective refusal to witness and believe female pain.