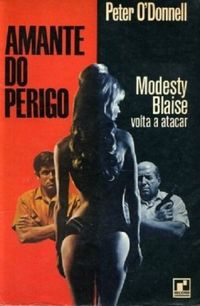 "The Silver Mistress" (Modesty Blaise Series, #7) by Peter O'Donnell (first published 1973) '-' This seventh novel in the Modesty Blaise series will not fail to please any of Modesty's innumerable fans. Modesty and her partner, Willie Garvin, are hot on the trail of a captured British Intelligence agent  Sir Gerald Tarrant, head of a secret service department in the British Government  but when they confront Sir Gerald's bizarre captorsa criminal tycoon (Colonel Jim Straik), a genteel pair of lady assassins (Angelica "Angel" and Clare McTurk); two inscrutable Japanese killers, and the invincibe Mr. Sexton, the world's premier combatanteven Modesty begins to doubt that she can succeed in this operation. Her task is further complicated when Willie's girlfriend (Lady Janet Gilliam) and a young friend (The pilot Henry Quinn) also are taken hostage. Their situation seems hopeless until the Silver Mistress appears, bringing this thrilling saga to an astonishing climax'.'

|...| Mr. Sexton is the leader of a kidnapping operation. This starts a long chain of events: Modesty Blaise rescues a new friend, Henry Quinn, and then later Quinn provides the missing information that convinces Modesty that Sir Gerald has been kidnapped. (Until now everyone had believed that Sir Gerald had died together with his chauffeur when his car went tumbling down into the Tarn River.) Modesty and Willie Garvin have by chance already determined the probable location of Sir Gerald's captivity: Chateau Lancieux in the foothills of the Pyrenees in Southern France. A hasty rescue mission is set in action. Modesty and Willie gain access to the chateaux via a deep cave, but on entering into the basement they are captured by the formidable Mr. Sexton, who prides himself on being the world's greatest unarmed combat man. Now Modesty and Willie are scheduled to die at Mr. Sexton's hand, one at a time, to further the process of softening Sir Gerald up for interrogation! '-'