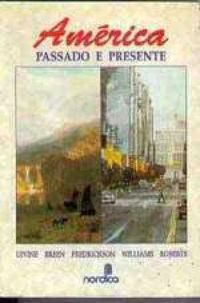 America: Past and Present

America: Past and Present

"America: Past and Present" (first published January 1st 1984) integrates the social and political dimensions of American History into one chronological narrative, providing students with a full picture of the scope and complexity of the American past. Written by award-winning historians, it tells the story of all Americanselite and ordinary, women and men, rich and poor, white majority and minorities. The authors, all active, publishing, and award-winning historians, bring history to life for introductory students in 'America Past and Present'.

"This is by far one of the best organized, most readable textbooks covering Unites States history available on the market today. It makes my job much easier, knowing that as i advance through time in my class lectures, students can follow along in the textbook in a logical sequence with the much appreciated timelines in each chapter." -- Richard B. McCaslin, University of North Texas.
====
[About the Authors]:
- Robert A. Divine, George W. Littlefield Professor Emeritus in American History at the University of Texas at Austin, received his Ph.D. from Yale University in 1954. A specialist in American diplomatic history, he taught from 1954 to 1996 at the University of Texas, where he was honored by both the student association and the graduate school for teaching excellence. His extensive published work includes The Illusion of Neutrality (1962); Second Chance: The Triumph of Internationalism in America During World War II (1967); and Blowing on the Wind (1978). His most recent work is Perpetual War for Perpetual Peace (2000), a comparative analysis of twentieth-century American wars. He is also the author of Eisenhower and the Cold War (1981) and editor of three volumes of essays on the presidency of Lyndon Johnson. His book, The Sputnik Challenge (1993), won the Eugene E. Emme Astronautical Literature Award for 1993. He has been a fellow at the Center for Advanced Study in the Behavioral Sciences and has given the Albert Shaw Lectures in Diplomatic History at Johns Hopkins University.

- Thomas H. Breen / T. H. Breen, William Smith Mason Professor of American History at North­ western Uni­ versity, received his Ph.D. from Yale University in 1968. He has taught at Northwestern since 1970. Breens major books include The Character of the Good Ruler: A Study of Puritan Political Ideas in New England (1974); Puritans and Adventurers: Change and Persistence in Early America (1980); Tobacco Culture: The Mentality of the Great Tidewater Planters on the Eve of Revolution (1985); and, with Stephen Innes of the University of Virginia, Myne Owne Ground: Race and Freedom on Virginias Eastern Shore (1980). His Imagining the Past (1989) won the 1990 Historic Preservation Book Award. His most recent book is Marketplace of Revolution: How Consumer Politics Shaped American Independence (2004). In addition to receiving several awards for outstanding teaching at Northwestern, Breen has been the recipient of research grants from the American Council of Learned Societies, the Guggenheim Foundation, the Institute for Advanced Study (Princeton), the National Humanities Center, and the Huntington Library. He has served as the Fowler Hamilton Fellow at Christ Church, Oxford University (19871988), the Pitt Professor of American History and Institutions, Cambridge University (19901991), the Harmsworth Professor of American History at Oxford University (20002001), and was a recipient of the Humboldt Prize (Germany). He is currently completing a book tentatively entitled America s Insurgency: The Peoples Revolution, 17741776.

- George M. Fredrickson is Edgar E. Robinson Professor Emeritus of United States History at Stanford Uni­ versity. He is the author or editor of several books, including The Inner Civil War (1965), The Black Image in the White Mind (1971), and White Supremacy: A Comparative Study in American and South African History (1981), which won both the Ralph Waldo Emerson Award from Phi Beta Kappa and the Merle Curti Award from the Organization of American Historians. His most recent books are Black Liberation: A Comparative History of Black Ideologies in the United States and South Africa (1995); The Comparative Imagination: Racism, Nationalism, and Social Movements (1997); and Racism: A Short History (2002). He received his A.B. and Ph.D. from Harvard and has been the recipient of a Guggenheim Fellowship, two National Endowment for the Humanities Senior Fellowships, and a fellowship from the Center for Advanced Studies in the Behavioral Sciences. Before coming to Stanford in 1984, he taught at Northwestern. He has also served as Fulbright lecturer in American History at Moscow University and as the Harmsworth Professor of American History at Oxford. He served as president of the Organization of American Historians in 19971998.

- R. Hal Williams is professor of history at Southern Methodist University. He received his A.B. from Prince­ ton Uni­ versity in 1963 and his Ph.D. from Yale Uni­ versity in 1968. His books include The Democratic Party and California Politics, 18801896 (1973); Years of Decision: American Politics in the 1890s (1978); and The Manhattan Project: A Documentary Introduction to the Atomic Age (1990). A specialist in American political history, he taught at Yale University from 1968 to 1975 and came to SMU in 1975 as chair of the Department of History. From 1980 to 1988, he served as dean of Dedman College, the school of humanities and sciences, at SMU, where he is currently dean of Research and Graduate Studies. In 1980, he was a visiting professor at University College, Oxford University. Williams has received grants from the American Philosophical Society and the National Endowment for the Humanities, and he has served on the Texas Committee for the Humanities. He is currently working on a study of the presidential election of 1896 and a biography of James G. Blaine, the late-nineteenth-century speaker of the House, secretary of state, and Republican presidential candidate.

- Ariela J. Gross is Professor of Law and History at the University of Southern Cali­ fornia. She received her B.A. from Harvard University, her J.D. from Stanford Law School, and her Ph.D. from Stanford University. She is the author of Double Character: Slavery and Mastery in the Antebellum Southern Courtroom (2000) and ­ numerous law review articles and book chapters, including Caucasian Cloak: Mexican Americans and the Politics of Whiteness in the Twentieth-Century Southwest in the Georgetown Law Journal (2006). Her current work in progress, What Blood Wont Tell: Racial Identity on Trial in America, to be published by Farrar, Straus & Giroux, is supported by fellowships from the Guggenheim Foundation, the National Endowment for the Humanities, and the American Council for Learned Societies.

- H. W. Brands is the Dickson Allen Anderson Centennial Professor of History at the University of Texas at Austin. He is the author of numerous works of history and ­ international affairs, including The Devil We Knew: Americans and the Cold War (1993), Into the Labyrinth: The United States and the Middle East (1994), The Reckless Decade: America in the 1890s (1995), TR: The Last Romantic (a biography of Theodore Roosevelt) (1997), What America Owes the World: The Struggle for the Soul of Foreign Policy (1998), The First American: The Life and Times of Benjamin Franklin (2000), The Strange Death of American Liberalism (2001), The Age of Gold: The California Gold Rush and the New American Dream (2002), Woodrow Wilson (2003), and Andrew Jackson (2005). His writing has received critical and popular acclaim; The First American was a finalist for the Pulitzer Prize and a national bestseller. He lectures frequently across North America and in Europe. His essays and reviews have appeared in the New York Times, the Wall Street Journal, the Washington Post, the Los Angeles Times, and Atlantic Monthly. He is a regular guest on radio and television, and has participated in several historical documentary films.