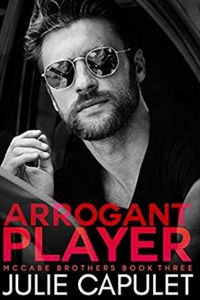 He's ruthless. And he won't stop until he has her right where he wants her ...

Luna LaRoux has poured her heart and soul into her waterfront bar and restaurant, which has the best sunsets in Key West. The only problem is, Luna's best friend and business partner Josie is having money problems, and with twins on the way, Josie has no choice but to sell her half of the business. Actually, it's 51%.

Gage McCabe is spending the weekend in Key West when he happens to overhear an interesting conversation. Between a very pregnant majority shareholder and her stunningly beautiful--and deliciously desperate--business partner.

Gage can't resist. The bar is obviously a thriving business, and his new partner will just have to get used to him calling the shots ... if she doesn't kill him first. It's this detail that frustrates him the most: she seems entirely immune to his charms. Unheard of. Gage is so sure of his own allure, he bets Luna his share that she'll surrender to him within a month--or the bar is hers.

Perfect. All Luna has to do is resist his drop-dead gorgeous looks, his smug charisma and his impressive ... endowments, then she'll be rid of him for good. Easy, right?

Arrogant Player is a sexy standalone enemies-to-lovers novel starring an alpha playboy and the one woman he can't control ... or stay away from.

Book 3 of the McCabe Brothers series

ulie Capulet writes fun, sexy romance starring obsessed alphas and the sweet and sassy women who bring them to their knees. Her stories are inspired by true love and shes married to her own real life hero. When shes not writing, shes reading, walking on the beac...