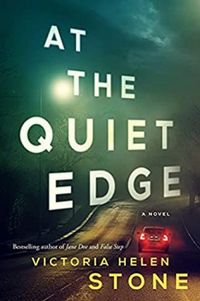 At the Quiet Edge: A Novel (English Edition)

Abandoned by her fugitive ex-husband, Lily Brown is rebuilding her life on the edge of a Kansas town that still feels the sting of his crimes. Lily lies low, managing the isolated storage facility where she lives with her twelve-year-old son, Everett, and planning a better future for them both. That requires keeping secrets. Everett has them too.

After breaking into a storage unit, Everett finds photographs and news clippings of five girls missing for decades. For Everett, its an adventure and a tempting mystery to solve. But digging further into a strangers obsession is putting Everett and his mother in the crosshairs of a killer.

Then Lilys ex resurfaces from the shadows. Just as suddenly, an attentive new man enters Lilys life. And a suspicious detective, responding to reports of a prowler, watches every move Lily makes. Its getting harder for Lily to know who to trust―or whose secrets pose the most frightening threat of all.

Resenhas para At the Quiet Edge: A Novel (English Edition) (0)