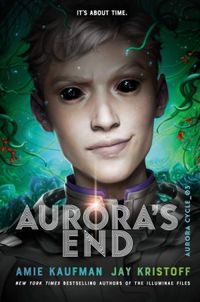 The squad you love is out of time. Prepare for the thrilling finale in the epic, best-selling Aurora Cycle series about a band of unlikely heroes who just might be the galaxy's best hope for survival.

Is this the end?


What happens when you ask a bunch of losers, discipline cases, and misfits to save the galaxy from an ancient evil? The ancient evil wins, of course.
Wait! Not. So. Fast.
When last you saw the crew, they were biting their nails as an intergalactic battle raged and one not-so-stable Weapon threatened to obliterate them. But as it turns out, not all endings are endings. So when the Weapon that was supposed to save them misfires, sending different members of Squad 312 through a time loop, our heroes will need to rethink their strategy.
Cue Zila, Fin, and Scarlett to infiltrate a flailing space station several hundred years in the past and prevent it from implodingand destroying the galaxy? Check. (Provided youre willing to Try, Die, and Repeat a few dozen times)
Cue Tyler, Kal, and Auri, to unite with two of the galaxys most hated villains to combat the spread of a foe so destructive its swallowed entire planets? Um, okay. That, too.
Get everybody back in the same place and the same time, and maybejust maybeplan a reunion to end all others?
Now that will take a miracle.