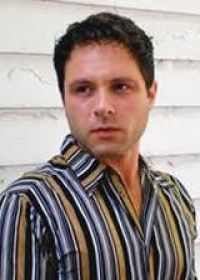 4.8
5 avaliações
LIVROS 4
LEITORES 1.864
SEGUIDORES 13
Gêneros Contos,Crime,Ficção,Romance policial,Suspense e Mistério | Nascimento: 18/10/1975 | Local: Estados Unidos - Louisiana - Nova Orleans
Nic Pizzolatto is an American novelist, screenwriter, and producer. Pizzolatto was born in New Orleans, Louisiana. He was educated at the University of Arkansas and Louisiana State University. The author of two books, he taught fiction and literature at the University of North Carolina at Chapel Hill, the University of Chicago, and DePauw University before leaving academia in 2010.

His first novel, Galveston, was published by Scribner's in June, 2010. It was translated and published in France by Editions Belfond, Hong Kong, Germany, and in Italy by Mondadori, as part of their Strade Blu line.

In 2012, he created an original television series called True Detective, which was sold to HBO and completed shooting in June 2013, with Pizzolatto as executive producer, sole writer, and showrunner.