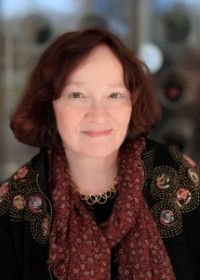 4.3
3 avaliações
LIVROS 5
LEITORES 770
SEGUIDORES 6
Gêneros | Local:
Ive written lots of romances as Mary Jo Putney. M. J. Putney is my YA alter ego, since I didnt want the romances confused with my young adult paranormals. Hence, a name different enough to show these are a different kind of book, but similar enough that its clear who I am.

I grew up in the dairy farm country of Upstate New York, which has been really useful since I write historical novels set in more agricultural time periods. I was an obsessive reader, the sort who read books under the blankets with a flashlight. My mother said Id ruin my eyes. She was right.

When bored in classes, I would quietly daydream stories. My largest story was a multiple character saga with romance and adventure set in World War II.

Since high school wasnt too exciting, I skipped a year and went off to college a year early. I left six years later with bachelors degrees in 18th Century British Literature and Industrial Design. (Most people who spend that long in college at least get a Masters!),

I bought a one-way ticket to California and set off, design portfolio in hand. Im not sure Id recommend this to everyone, but it seemed perfectly logical at the time.

After several years of working in California, I headed off to England, where I lived in Oxford for a couple of years. It was great! The time I spent exploring the British Isles has since been invaluable for all my British set novels.

While in England, I worked as art editor for the New Internationalist magazine,. This was my first exposure to professional writers. I learned that most writers needed to be forced to the keyboard with whips and threats to get them to settle down and actually write. I regret to say that now that I am a professional writer myself, Ive found this to be entirely true.

On returning to the U.S., I mooched off my brother and his wife in Northern Virginia until I found a job near Baltimore. (Luckily, before they got tired of having me around.) Ive lived in Maryland every since. I like the history, the beautiful scenery, and the four distinct seasons.

Im fond of reading, cats, travel, and most of all, great stories. Dark Mirror is my first young adult novel, but not the last. The Dark Passage series is set in an alternative early 19th Century England world where aristocratic young people who have magical powers are sent to the infamous school at Lackland Abbey to be cured of their despised abilities.

The series is, in fact, sort of a multiple character saga with romance and adventure, part of which is set in World War II. I love writing in this world, so who knows? There may be lots more stories ahead!