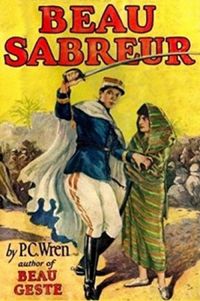 
Major de Beaujolais, courageous and gallant, is detailed for a dangerous secret missing among hostile Arabs. With two white women, snatched from the hands of fanatics, he ventures into the desert. Then, success within his grasp, he faces an agoninzing decision - his love, or his duty to France. A romantic adventure set in the Sahara desert, and the sequel to the successful Beau Geste.