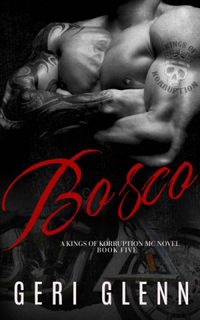 I was just six months pregnant when I lost the man I was going to marry. Mouse was caught in the crosshairs of a war between the Kings of Korruption MC and a rival club, leaving me to raise our daughter alone. Brokenhearted, angry, and terrified, I struggle through life, determined to raise my daughter the best way I know how.

Since the day Mouse was killed, Bosco has been tasked with watching over us. As time passed, he became a part of the family, a man my daughter can rely on. A man who has never let me down, and whose intensity makes me weak in the knees. But that man is part of the same club that got Mouse killed, and theres no way I can put myself or my daughter through that a second time.

Taking care of Sarah and her daughter may have started out as a duty handed down to me by the president of my club, but now its as vital to me as breathing. Now Ive become attached. Ive learned how kind, brave, and sexy Sarah is. I was even there when she gave birth to the little girl that captured my heart the moment she took her first breath.

My feelings for her have turned from friendship to an all-consuming passion that threatens to burn me from the inside out, but I know shes not ready. So, I wait. I wait while she takes the time she needs and stand by while she grieves. But when the world as we know it is rocked on its foundation, I cant wait any longer. I need to prove to her that its okay to move on, that we need each other. That I will do whatever it takes to make her happy.

Geri Glenn writes alpha males. Shes best known for writing motorcycle romance, including the internationally bestselling series, the Kings of Korruption MC. She lives in the Thousand Islands with her hubby, two young girls, one big dog and one terrier that th...