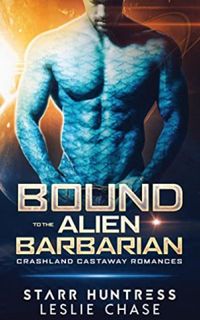 Bound to the Alien Barbarian

Crashed on the wrong planet.
Stuck with the wrong man.
Taken by the right alien.

I'm supposed to be safe on Arcadia Colony. Instead, I'm trapped on Crashland. Most of the colonists in my landing pod are dead, and the one other survivor is a creep. My only friend? A holographic cat.

Until I'm snatched up by an alien barbarian. Kidnapped or rescued? I don't know. All I'm sure of is that I've never met someone as attractive as Zarkav.

He's huge, blue, with abs to die for. And that massive bulge under his kilt scares me as much as it entices me.

We don't have a language in common, but it's not hard to figure out what the alien brute wants with me. His brooding gaze says it all.

The alien wants to mate with me.

And I don't know if I can resist.