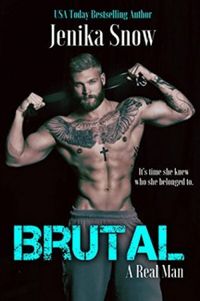 It's time she knew who she belonged to.

It's time she knew who she belonged to.

Shes my best friend, my everything.

Shes been the girl Ive loved since I knew what that meant.

I boxfight bloodyfor a living, and at every fight shes there, cheering me on, being mine whether she knows it or not.
Ive never been with a woman because for me shes it. Roxie is the only one Ill ever want.

Enough time has passed. Its time I told Roxie how I feel, because theres no way I can hold in my feelings any longer.

I want to think the looks, the possessiveness that comes from him means he wants me the same way I want him. Hes been in my life for longer than I can remember, and I never want that to change.

Ill be with him until the end. My love for him runs so deep, so strong I cant breathe at times.

I watch as he pushes other girls away, his gaze locked on mine as if hes trying to tell me there isnt anyone else for him.
But Im afraid to turn our relationship from friends to lovers. Im afraid of crossing that line that could ruin what we have.


*Warning: This is a super sweet friends-to-lovers story. Dont worry; it still has that OTT alpha hero whos head over heels in love with his woman and caveman to a fault. Grab some ice, because its going to get hot in here!