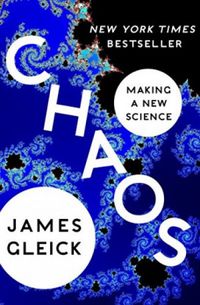 For centuries, scientific thought was focused on bringing order to the natural world. But even as relativity and quantum mechanics undermined that rigid certainty in the first half of the twentieth century, the scientific community clung to the idea that any system, no matter how complex, could be reduced to a simple pattern. In the 1960s, a small group of radical thinkers began to take that notion apart, placing new importance on the tiny experimental irregularities that scientists had long learned to ignore. Miniscule differences in data, they said, would eventually produce massive onesand complex systems like the weather, economics, and human behavior suddenly became clearer and more beautiful than they had ever been before.

In this seminal work of scientific writing, James Gleick lays out a cutting edge field of science with enough grace and precision that any reader will be able to grasp the science behind the beautiful complexity of the world around us. With more than a million copies sold, Chaos is a groundbreaking book about what seems to be the future of physics by a writer who has been a finalist for both the Pulitzer Prize and the National Book Award, the author of Time Travel: A History and Genius: The Life and Science of Richard Feynman (Publishers Weekly).