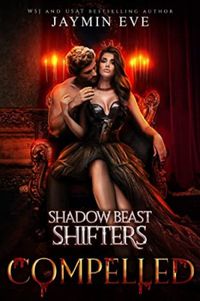 A standalone story in the Shadow Beast Shifters world. Best read after Deserted for storyline continuity.
Simone, of the Torma shifters, thought she was finished with the world of supernaturals that existed outside of Earth. Shed been there, done that, and had the near death experience to show for her time.

Then a summons back to Valdorthe vampire world is dropped in her lap.

Turns out that the last time she was there, her teeny tiny mistake sent out an energy burst that called to an ancient powerful master. A master who is looking for a mate and wants Simone to participate in the Selection to prove her worth. Attendance non-negotiable.

Lucky for her, she still has one ally up her sleeve: Lucien.

Okay, yeah, hes a snarly, powerful, frustratingly perfect master himself, but at least she knows where she stands. Lucien agrees to enter himself as a master-looking-for-a-mate in the Selection so they can pretend to fall for each other.

Only, its never been that simple with Simone and Lucien, and all too soon the lines between pretend and real get very blurry. Especially when theres feeding involved.

Simone now has more at stake than just her life... her heart is on the line.

* This is a standalone in the Shadow Beast world, and does NOT end on a cliffhanger. It is full length at 110k words, and it is advised to read the first four in the Shadow Beast world first (Rejected, Reclaimed, Reborn, Deserted) to get the most enjoyment from the story. Not required though. This is an enemies to lovers story, with action, snark, anti-heroes, and steam. It is recommended for 18+ due to storyline and situations.

Born: 11th October 1984 Lives: Gold Coast, Australia Owns: One husband, two daughters and one naughty Australian Cattle Dog. From a young age my mother instilled in me a love of the written word. For as long as I could remember reading was my escape. I grew ...