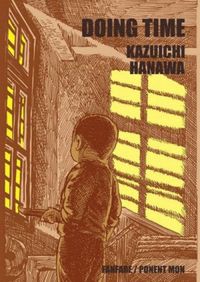 Up to now, Kazuichi Hanawa expressed himself through works of fiction. The fantastic world of tales from the Middle Ages in Japan was his favorite setting. In 1994 Hanawa was arrested for owning a firearm. An avid collector of guns, he was caught whilst testing a remodeled handgun in the backwoods, miles away from anyone, and imprisoned for three years. Forbidden to record any details whilst incarcerated, Hanawa recreated his time inside after his release. He did so with a meticulousness rarely found in comics as every detail of his cell, every meal that was served, the daily habits of his cell-mates and, above all, the rigid regime are minutely noted and bring us into the very mindset of a Japanese prisoner. Made into a live action movie in 2002 by Sai Yoichi (All Under the Moon).