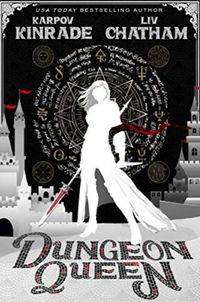 From Liv Chatham and Karpov Kinrade--the USA Today bestselling author of Vampire Girl, comes a new kind of fantasy romance. Enter a world unlike any other, full of sexy men, exciting adventures, plot twists, mystery, and did we mention sexy men?

My name is Lily Lemon and my life has always come in threes.

I was born on the third day of the third month as the youngest of three daughters, and I spent three years working three jobs to attend my dream college. I had epic plans, but my first week of class, three epically bad things happened. Not the least of which was I died. Like, literally.

But am I really dead? Because this isn't the afterlife I was expecting. Instead of pearly gates or eternal damnation, I end up in a magical world quite unlike our own. A world where I am strong, mighty, powerful... I am a queen who may or may not be a reincarnated Greek Goddess. I know, crazy, right?

This would be super exciting and all, but turns out monsters have been unleashed in this world and my own, and I have to stop them. Problem is, a new ruler is rising, making false promises and putting everyone in danger. Now, I'll have to conquer the dreaded Dungeons to save my people, all the while dealing with this false king's crap. Good thing I don't have to go it alone.

There are three who seek to ally with me (pretty sure this is code for sex, but who's complaining?)

A thief bound to me. (Hello Son of Zeus, nice lightning bolt you have there!)

A wolf mated to me. (He's the bastard Son of Poseidon who got frisky with some she-wolf. Don't judge. But seriously, the Greeks will sleep with literally anything!)

And a fae destined to me. (The Son of Hades never looked so goodfor a guy invisible most of the time.)

This world is about to learn you don't mess with Lily Lemon, or Ill make lemonade with your head. (It's a thing.)

The Devious King will fall. The monsters will be subdued.

And a new Queen will rise from the Dungeons to save us all.