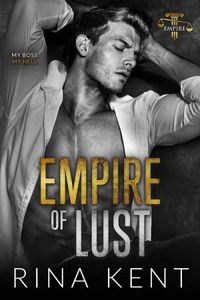 An Enemies with Benefits Romance

An Enemies with Benefits Romance

My boss. My hell.

When I slept with a faceless jock as a teen, I didn't think I would become pregnant.
I also didn't think I would lose that child.
Several years later, I find out that my daughter is alive and I'm given a second chance.
One problem, though.
The faceless jock isn't so faceless anymore.
He has a name everyone fears; Kingsley Shaw.
A ruthless bastard. A heartless devil. And most importantly, my daughter's father.
Oh, and he hates me as much as I hate him.
We're out to destroy one another with all methods available.
Including a dangerous game of lust that might lead to our downfall.

Empire of Lust is a complete STANDALONE. No other books should be read prior to this.

Rina Kent in an English author who's constantly parading between France and North Africa due to her studies and her husband's demanding job. When she's not packing suitcases or hopping from one plane to the other, she's busy whipping her characters to shape. Sinc...