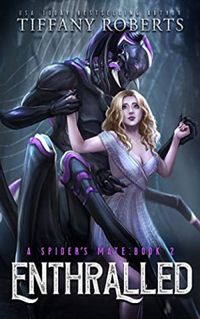 He conquered her, but he is the one enthralled.

Ketahn hadnt wanted a mate. Fate gave him Ivy Foster. Now, he wants nothing more than to enjoy his little human.

But fate is not content to make things so simple.

With an enraged queen searching for him, Ketahn knows the Tangle is not safe for his mate. They need to leave. Yet Ivy will not forsake her people, and he cannot condemn her compassion. When they wake the other humans from their death sleeps, Ketahn now has more mouths to feed, and the strands of his web are in danger of snapping.

To keep Ivy and her people safe, he must placate the queen that hunts him. He must venture into Zurvashis domain and face her wrathand her desire.

The strength of his heartsthread, his bond with Ivy, will be tested.

Ketahn refuses to let that thread break. Even if he must sever all the rest.
-----
Book 2 of 3 in The Spider's Mate Trilogy.
Warning: Contains darker themes, S/A, and death. There is also a cliffhanger.