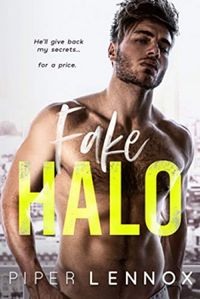 Hell give back my secrets.

Turns out the email I just sent my therapistwherein I detail my biggest, closest-guarded secretsdid not go to my therapist.

It went to Westcott Durham.

Blackmails the name of his game. My sentence: eight weeks of hell as his personal assistant.

Now hes making me pretend I like him, all so his has-been music channel (and his bedsheets, Im sure) will see some traffic from my fans. I cant say no, even when he makes it clear hes not pretending, anymore. I think.

I hate Wes Durham with almost everything I am.

Fake Halo is a standalone, full-length romance novel with steamy scenes, an HEA, and no cliffhanger.