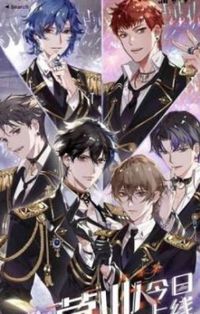 Kaleido, a talented but unpopular boy band, shot to fame by chance because of a video shot at the airport. In the video, Pei Tingsong, the youngest and most gong member of the whole group, pinned Fang Juexia Gege against a wall as he gently patted his face with a ticket. Yet Fang Juexia just took the ticket away, biting it as he tidied up his clothes. A bullying incident within the group thus transformed into an intense flirting exchange, and the TingJue CP was born.

And thus, the abandoned trump card burdened by rumours of having had sold his body and the legendary rich member with a strong backing were bound together. They had clearly never gotten along since their debut, yet they were now forced to embark on an endless path of selling their fake ship together.

Pei Tingsong was famous for being real in the circle, and he had offended many people from his lyrics alone because they were overly real. But he stressed again and again that he and Fang Juexia were only providing fan service.

CP fan: [Someone who has never been fake is selling a fake ship.] May the philosophy students please explain the paradox to this young student Pei here.

Juexia: (seriously considers the logic) If B is true, then A is also true; but if A is true, then B should also be trueit really is a paradox.