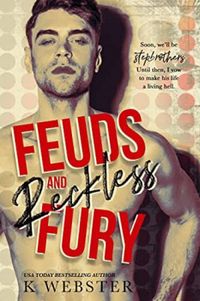 The hatred began when my father proposed to another man in a shocking moment that rocked my family to its core...

Now Im on a quest for revenge against my father.
That means hitting him where it hurtsthe new fiancé and the son he thinks so much of.
Alister Sommers.

Alis is a bleached blond perfectionist thorn in my side whos used to everything going his way. Grades, money, trackhe dominates it all despite his short, insignificant frame.

Was one dad not good enough that Alis had to take mine too?

Soon, well be stepbrothers.
Until then, I vow to make his life a living hell.
Maybe Dad will regret his terrible mistakes.
Maybe he wont.
I know I wont regret wrecking their lives like they did mine.

Ill give up everything, even my girlfriend and football, if it means I get a chance for retribution.

Its reckless and risky, but I dont have much to lose.
The havoc I wreak might ease some of the pain Dad caused my mother.
Im willing to give it a shot.

What starts as a family feud will become a war one I plan on winning no matter the cost.

Theres only one small problem.
I may have underestimated my opponent.