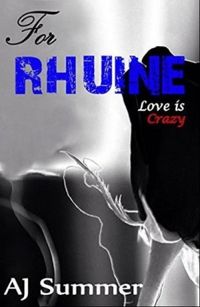 ***There are sensitive subjects discussed in For Rhuine, such as drug abuse, self-mutilation, anorexia and suicide.***

My name is Madeleine Saltz. Madi for short. I'm just a normal person. You wouldn't even look twice when you pass me on the street. On second thought, maybe you would. See, I'm crazy. And not just the woohoo-look-at-me-Im-doing-the-chicken-dance, kind of crazy.

I occupy the dainty little room, number 105, at Green Hill Mental institution. I have brown hair, blue eyes, and a splatter of freckles on my nose. Like I said, I'm normal, except for the crazy part.

And then there is, Rhuine.

The boy with the black swirl tattoo's. Or my imaginary friend (as my psychologist likes to call him). The friggin love of my life. Whichever name he goes by, he is the other reason why I'm not quite as normal as I would like to believe.

***For Rhuine is not suitable for readers under the age of 18 years.
For Rhuine contains material that might act as triggers to traumatic experiences.