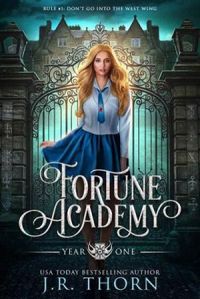 Welcome to Fortune Academy, a school where supernaturals can feel at homeexcept, I have no idea what the hell I am.

The last thing I remember is arriving at the massive gates with a Bounty Hunter staring me down. I have a feeling he was supposed to take me to the monster holding arena to fight and die. Instead, I'm Fortune Academy's newest student.

I can relate to the monsters in ways the other students can't. My mentor, who is way too hot for his own good, tells me my behavior is the result of my memory loss and that I'm just trying to identify with a past pain that I've buried too far to feel. I think he's wrong. I think the reason I can't relate to any of the students is because I'm one of the monsters they're trained to kill.

I don't fit into any of the supernatural cliques, but that doesn't stop me from collecting bullies. A brawny alpha shifter, a moody dark mage, and a playboy demi-god have decided to break me. They think I don't have any powers and that I was recruited by mistake. It'll be their funeral if they push me too far, because this girl isn't taking any of their shit.

My name is Lily Fallen, but don't let my pretty face fool you. I'm a monster in a school uniform and it's only a matter of time before I teach my bullies a lesson they won't forget.