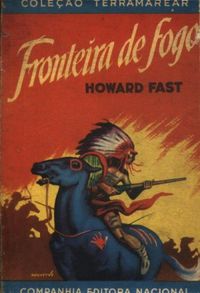 Originally published in 1941, The Last Frontier is the story of the Cheyenne Indians in the 1870s, and their bitter struggle to flee from the Indian Territory in Oklahoma back to their home in Wyoming and Montana. Some 300 Indians, led by Little Wolf, fought against General Crook and 10,000 troops, with only 60 finally making it through to freedom. Fast extensively researched this book in the late 1930s, visiting and speaking with Cheyenne experts in Norman, Oklahoma. This was the first of Fast's many books to gain a wide popular audience; it was eventually made by John Ford into the classic film Cheyenne Autumn (1964).
====
[IMDb] Cheyenne Autumn / Crepúsculo de uma Raça (1964) -- Estrelando Richard Widmark, Carroll Baker, Karl Malden, Dolores de Rio, Ricardo Montalban, Sal Mineo, Patrick Wayne, Arthur Kennedy, James Stewart, Edward G. Robinson, John Carradine, George O'Brien, Victor Jory, Gilbert Roland: "When the government agency fails to deliver even the meager supplies due by treaty to the proud Cheyenne tribe in their barren desert reserve, the starving Indians have taken more abuse than it's worth and break it too by embarking on a 1,500 miles journey back to their ancestral hunting grounds. US Cavalry Capt. Thomas Archer is charged with their retrieval, but during the hunt grows to respect their noble courage, and decides to help them". -- KGF Vissers

[Editorial Reviews] "Fast's writing, austerely polished and austerely poetic, is admirably suited to this epic tale of a desperate effort for dignified survival. ... Fast has gotten to the core of this incident and made it into a rich American novel". -- New York Times Book Review".

"An amazing restoration and reconstruction. Thecharacters breathe, the landscape is solid ground and sky, and the story runs flexibly along the zigzag trail of a people driven by a deep instinct to their ancient home. I do not know any other episode in Western history that has been so truly and subtly perpetuated as this one. A great story lost has been found again, and as here told promises to live for generations". -- Carl Van Doren.