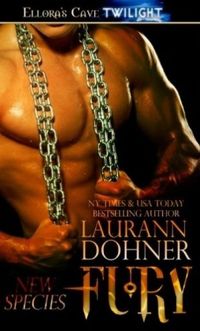 Ellie is horrified to discover the pharmaceutical company she works for is doing illegal experiments. Company scientists have spliced human and animal DNA, creating exotic new species. One such experiment captures her heart and shell do anything to save himeven if he hates her for it.

Fury has never known compassion or love. Hes spent his life in a cell, chained and abused by humans. The one woman he allowed himself to trust betrayed him. Now hes free and set on vengeance. He vows to end her life but when shes finally in his grasp, harming her is the last thing he wants to do to the sexy little human.

Fury cant resist Elliethe touch of her hands, her mouth on his skin, her body wrapped around his. Hes obsessed with the scent of his woman. And Ellie wants Furyalways has. She craves his big, powerful body and wants to heal his desolate heart.

But loving Fury is one thingtaming him is another.

I had a rather short area here telling a little about me but then I had more than a few people ask me to expand it so... here goes. LOL. I'm a full time home 'supervisor' which is a nice word for saying I'm a housewife. I'm married happily, I met my dream guy 20 ye...