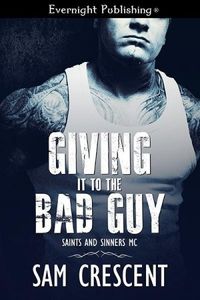 Giving It to the Bad Guy

Giving It to the Bad Guy (Saints and Sinners MC #3)

Sarah has had enough of her ex, Ralf. Not only did he leave her, but now he has kidnapped her, dragging her all the way back to Sinners Corner, expecting them to carry on with the relationship he ended a year earlier.

However, when Ralf decided to walk out on her a year ago, Sarah met Knife. Hes a member of the Hells Wolves MC, and he makes her heart race and her panties wet. Now that shes back in town, Knife is not going to let Ralf win without a fight. From the first moment he met Sarah, Knife wanted her, but he waited, respecting her wishes and giving her space.

The time for waiting is over. May the best man win!