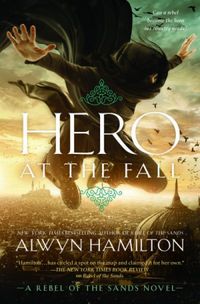 Hero At The Fall

Can a rebel become the hero her country needs? (US edition)

Hero At The Fall (Rebel of The Sands #3)

Can a rebel become the hero her country needs? (US edition)

Once, in the desert country of Miraji, there was a Sultan without an heir.

The heir had been killed by his own brother, the treacherous Rebel Prince, who was consumed by jealousy and sought the throne for himself.

Or so it was said by some. There were others who said that the Rebel Prince was not a traitor but a hero...

In the final battle for the throne, Amani must fight for everything she believes in, but with the rebellion in pieces, and the Sultan's armies advancing across the desert plains, who will lead, who will triumph, who will live and who will die?

Resenhas para Hero At The Fall (2)