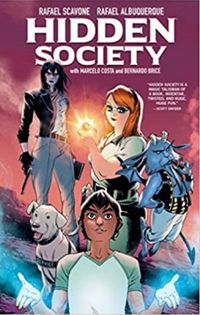 A new series from Rafael Albuquerque and Rafael Scavone, the team behind Neil Gaiman's A Study in Emerald!

Hidden from ordinary eyes, there is a world alongside our own full of deities, demons, and danger--where magic wins out over science and dark secrets lie in wait. Ulloo, the last wizard from the Hidden Society, enlists the aid of a blind girl and her demon, a young magician, and a cursed bounty hunter in order to stop a group of nihilist warlocks from waking the Society's greatest nemesis: a primeval force that, unchecked, will scorch the planet bare of all life.

Collects Hidden Society #1-#4, along with all covers, a sketchbook section, and pinups by Fábio Moon, Gabriel Bá, Greg Tocchini, and Matteo Scalera.