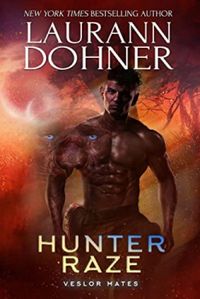 When her parents died in her youth, Anabel Brickalong with her sister, Jessawas raised as an orphan of United Earth. While her sister became an Alien Research Specialist, Anabels skills were put to a different use. Shes a tool for U.E. and its military fleeta spya killer. Her current mission also turns out to be her last. If she succeeds, if the criminals dont take her out first, shell remain marooned on the deep-space planet. Any rescue effort too dangerous to attempt for a single operative. Anabel always knew her life wasnt going to have a happy ending.

Little does Anabel know, the hunter is about to become the hunted.

Raze and his hunter grouping have suffered too much loss. All they have left is each other and the anticipation of hunting prey for the rest of their lives. It does give them a sense of peace to track, capture, and sometimes kill vile beings who harm others. Now his grouping has been commissioned by other Veslors to find Anabel and return her to her family safely. Finding the female is easy; Raze and his grouping brothers are the best at what they do. Subduing a woman whos more than human is another matter.

Little does Raze know, rescuing Anabel could have dire consequences for everyoneVeslors included.