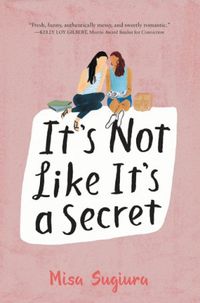 Sixteen-year-old Sana Kiyohara has too many secrets. Some are small, like how it bothers her when her friends dont invite her to parties. Some are big, like the fact that her father may be having an affair. And then theres the one that she can barely even admit to herselfthe one about how she might have a crush on her best friend.

When Sana and her family move to California, she begins to wonder if its finally time for some honesty, especially after she meets Jamie Ramirez. Jamie is beautiful and smart and unlike anyone Sanas ever known. There are just a few problems: Sana's new friends don't trust Jamie's crowd; Jamie's friends clearly don't want her around anyway; and a sweet guy named Caleb seems to have more-than-friendly feelings for her. Meanwhile, her dads affair is becoming too obvious to ignore.

Sana always figured that the hardest thing would be to tell people that she wants to date a girl, but as she quickly learns, telling the truth is easywhat comes after it, though, is a whole lot more complicated.

Luana.Vasques
2
This book started strong and cute. The first part was really good, but about halfway to the end, it took a turn. Everything started happening at once and not all of it was well developed so it got a bit chaotic. There were some parts that were left without a resolution and many moments between the Sana and Jamie happened during a time jump and we couldn't enjoy it. The book does bring up extremely relevant topics like racism between different communities, I'm just not sure if it wa... leia mais