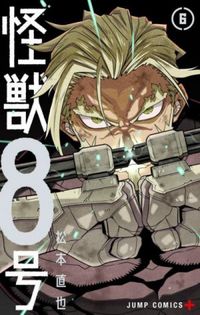 Grotesque, Godzilla-like monsters called "kaijuu" have been appearing around Japan for many years. To combat these beasts, an elite military unit known as the Defense Corps risks their lives daily to protect civilians. Once a creature is killed, "sweepers"working under the Professional Kaijuu Cleaner Corporationare left to dispose of its remains.

Kafka Hibino, a 32-year-old man, is unsatisfied with his job as a sweeper. From a young age, he has aspired to join the Defense Corps and kill kaijuus for a living. After a few failed attempts, however, he gave up on his dreams and resigned himself to the mediocrity that provided a decent paycheck. Nevertheless, when an ambitious, 18-year-old recruit named Leno Ichikawa joins his cleaning team, Kafka is once again reminded of his desire to join the military.

Following a chain of unfortunate events and an interaction with the junior sweeper, Kafka encounters a parasite-type kaijuu that forces its way in through his mouthturning him into a humanoid monster. With his newfound powers, Kafka aims to give his lifelong dream a final try.