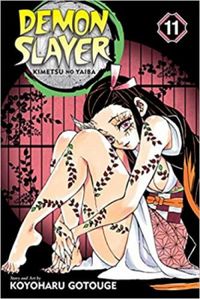 The battle against the powerful sibling demons Gyutaro and Daki is not going well. Although finally able to fight alongside Tanjiro against the monsters, Zenitsu, Inosuke and even the Hashira Tengen Uzui get knocked out of the fight, and Tanjiro stands alone. Battling even one of Lord Muzan's Twelve Kizuki is hard enough for one of the top Demon Slayers-what chance does Tanjiro have?