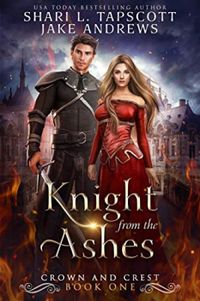 Knight from the Ashes

Knight from the Ashes

With single-minded determination, Henrik has worked toward gaining his knighthood so he may rise above the lowly station in which he was born. But just when the coveted position is within his grasp, hes tasked with a mission that proves to be far more difficult than expectedsecretly keeping a watchful eye on Lady Clover, a noblemans daughter with a sharp tongue and a knack for starting fights.

Clover, too, has one goal in life, and it has nothing to do with joining dull and dry Henrik on his supply run to the northern barracks. Why the blacksmiths son is so determined to keep her close, she has no idea. They bicker and fight, and if Clover were to find a troll pit, she would certainly dump Henrik into it.

By the time they reach their destination, they are more than ready to be rid of each other. But something is amiss in the northern mountains. The usually quiet aynauths are on the move, with a bloodthirsty agenda of killing the peaceful Woodmoor elves.

Left with no choice but to team up, Henrik and Clover investigate the strange happenings and uncover a sinister plot against the crown. Together, they have a chance to save the kingdombut only if they can keep from killing each other first