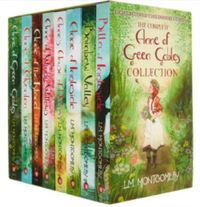 About Author :Lucy Maud Montgomery CBE, (always called "Maud" by family and friends) and publicly known as L. M. Montgomery, (November 30, 1874April 24, 1942) was a Canadian author, best known for a series of novels beginning with Anne of Green Gables, published in 1908.Once published, Anne of Green Gables was an immediate success. The central character, Anne, an orphaned girl, made Montgomery famous in her lifetime and gave her an international following. The first novel was followed by a series of sequels with Anne as the central character. The novels became the basis for the highly acclaimed 1985 CBC television miniseries, Anne of Green Gables and several other television movies and programs, including Road to Avonlea, which ran in Canada and the U.S. from 1990-1996. About Book :The classic Anne of Green Gables; inspiration for the Netflix original series Anne With an E.Anne of Green Gables is a 1908 novel by L.M. Montgomery. it has been considered a classic children's novel since the mid-twentieth century. Set in the late 19th century, the novel recounts the adventures of Anne Shirley, an 11-year-old orphan girl, who is mistakenly sent to two middle-aged siblings, Matthew and Marilla Cuthbert, who had originally intended to adopt a boy to help them on their farm in the fictional town of Avonlea on Prince Edward Island, Canada. The novel recounts how Anne makes her way through life with the Cuthberts, in school, and within the town. Based on the popularity of her first book, Montgomery wrote a series of sequels to continue the story of her heroine Anne Shirley. They are listed chronologically below. "Anne Of Green Gables","Anne Of Avonlea","Anne Of The Island","Anne Of Windy Poplars","Anne's House Of Dreams","Anne Of Ingleside","Rainbow Valley" and "Rilla Of Ingleside