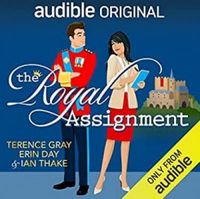 Maggie Patel has landed her dream job at The New York Spectator; or, it would be, if she could get a decent story assignment. When a career-making interview finally lands on her desk, its with the last person shed ever want to see again - Edward, the crown prince of Bairmorne...and her long-ago friend.

When Maggie was a child, her mother worked as a housemaid at the Royal Palace of Bairmorne, a small European nation, until they were unceremoniously kicked to the curb...amidst a cloud of whispered controversy and palace intrigue. Now, Prince Edward and Maggie are all grown up, and they both have jobs to do - but theres a spark between them they cant deny. Will that spark lead to something more, and can their attraction withstand public scrutiny, royal duty, and secrets from the past?