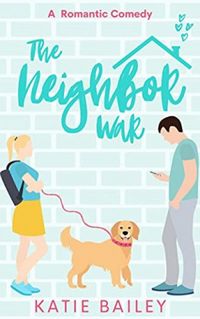 The Neighbor War: A Romantic Comedy

(Only in Atlanta Book 2)

The Neighbor War: A Romantic Comedy ((Only in Atlanta Book 2))

Aiden Shaw is the smuggest, most infuriating man Ive ever met. Ever. Hes also my next door neighbor.

Weve been at war for four bitter years. But last night, Aiden crossed a line.

The worst part? My public humiliation was caught on camera, and the videos a viral sensation.

Now, the entire internet is raving about our off the charts chemistry and crackling sexual tension.

Apparently, everyone is delusional. And blind.

Yet when Aiden turns up on my doorstep, asking me to pose as his girlfriend, I find myself saying yes. Even if that means taking a couples vacation with him. Yup, couples vacation. With my mortal enemy. Who I have to pretend to be madly in love with.

I can put our war on ice for a little while, Aiden Shaw.

But in the end, someones gotta lose.

And its not going to be me.

The Neighbor War is a laugh-out-loud funny, swoony, closed door romantic comedy. Expect some mild language and suggestive jokes alongside sizzling hot chemistry and tension you could cut with a knifeall without the explicit scenes.