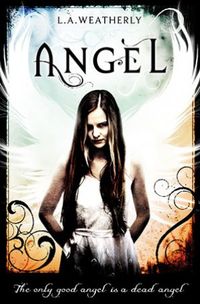 In a world where angels are beyond redemption, Alex thinks he's found one that might deserve mercy. Alex is a ruthless assassin - of angels. Forget everything you've heard about them before. Angels are not benign celestial creatures, but fierce stalkers whose irresistible force allows them to feed off humans, draining them of their vitality until there is barely anything left. As far as Alex is concerned, the only good angel is a dead angel...until he meets Willow. She may look like a normal teenager but Willow is no ordinary girl. Half-angel, half-human, Willow may hold the key to defeating the evil angels. But as the hunter and the hunted embark on an epic and dangerous journey and Willow learns the dark and terrifying secrets of her past, Alex finds himself drawn to Willow...with devastating consequences.

Lee Weatherly was born in 1967 and grew up in Little Rock, Arkansas, USA. She lives with her husband in Hampshire, England, where she writes, goes on walks, tries out new recipes and has a cat named Bernard. L.A. Weatherly is the pseudonym for Lee Weatherly. You...