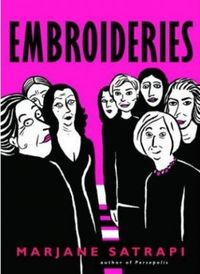 This slight follow-up to Satrapi's acclaimed Persepolis books explores the lives of Iranian women young and old. The book begins with Satrapi arriving for afternoon tea at her grandmother's house. There, her mother, aunt and their group of friends tell stories about their lives as women, and, more specifically, the men they've lived with and through. One woman tells a story about advising a friend on how to fake her virginity, a scheme that goes comically wrong. Another tells of escaping her life as a teenage bride of an army general. Satrapi's mother tells an anecdote of the author as a child; still others spin yarns of their sometimes glamorous, sometimes difficult, lives in Iran. The tales themselves are entertaining, though the folksiness and common themes of regret and elation feel familiar. Satrapi's artwork does nothing to elevate her source material; her straightforward b&w drawings simply illustrate the stories, rather than elucidating or adding meaning to them. Characters are hard to distinguish from each other, and Satrapi's depictions of gestures and expressions are severely limited, hampering any attempt at emotional resonance. This work, while charming at times, feels like an afterthought compared to Satrapi's more distinguished work on Persepolis and its sequel.