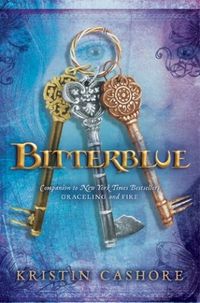 Eight years after Graceling, Bitterblue is now queen of Monsea. But the influence of her father, a violent
psychopath with mind-altering abilities, lives on. Her advisors, who have run things since Leck died, believe in a forward-thinking plan: Pardon all who committed terrible acts under Leck's reign, and forget anything bad ever happened. But when Bitterblue begins sneaking outside the castledisguised and aloneto walk the streets of her own city, she starts realizing that the
kingdom has been under the thirty-five-year spell of a madman, and the only way to move forward is to revisit the past.

Two thieves, who only steal what has already been stolen, change her life forever. They hold a key to the truth of Leck's reign. And one of them, with an
extreme skill called a Grace that he hasn't yet identified, holds a key to her heart.