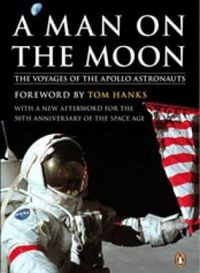 A Man On The Moon

A Man On The Moon

The Voyagers of the Apollo Astronauts - With a new Atterword for the 50th Anniversary of the Space A...

A decade in the making, this book is based on hundreds of hours of in-depth interviews with each of the twenty-four moon voyagers, as well as those who contributed their brain power, training and teamwork on Earth. In his preface Chaikin writes, We touched the face of another world and became a people without limits.

What follows are thrilling accounts of such remarkable experiences as the rush of a liftoff, the heart-stopping touchdown on the moon, the final hurdle of re-entry, competition for a seat on a moon flight, the tragic spacecraft fire, and the search for clues to the origin of the solar system on the slopes of lunar mountains.

Resenhas para A Man On The Moon (2)