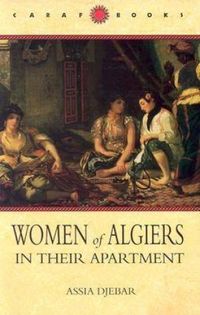 Women of Algiers in their apartment

Translated for the first time into English, this collection of short fiction by one of the leading writers of North Africa details the plight of Algerian women and raises far-reaching issues that speak to us all. Women of Algiers quickly sold out its first printing of 15,000 in France and was hugely popular in Italy, but the book was denounced in Algeria for its criticism of the postcolonial socialist regime, which denied and subjugated women even as it celebrated the liberation of men. It was the first work to do so openly. These stylistically innovative, lyrical stories address the cloistering of women, the implications of reticence, and the significance of language and its connection to oppression (Djebar calls official Arabic "an authoritarian language that is simultaneously the language of men"). Mixing newly written pieces with older ones, Djebar attempts "to bring the past into a dialogue with the present". The stories raise issues surrounding this passage from colonial to postcolonial culture - national literature, cultural authenticity, and the impact of war on both men and women. The book's title comes from a Delacroix painting that depicts a unique glimpse of the harem, an emblem of the dual violation of Algerian women, both colonial and gendered.