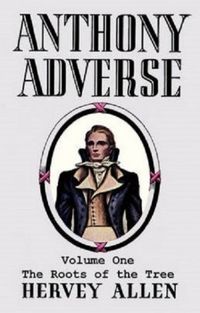 Anthony Adverse #1: The Roots of the Tree (Epic novel, 1933) -- Anthony Adverse is a 1936 American epic costume drama film directed by Mervyn LeRoy and starring Fredric March and Olivia de Havilland. Based on the novel Anthony Adverse by Hervey Allen, with a screenplay by Sheridan Gibney, the film is about an orphan whose debt to the man who raised him threatens to separate him forever from the woman he loves. The film received four Academy Awards.

The book has brilliantly memorable characters, plotlines, action, and tremendous scope. It is beautifully written with outstanding mood and nuance... Child of fortune. Conceived in France, born in an Alpine village, reared in a great house of Italy, Anthony never knew his parents, never had a name of his own. But he was born of passion and it filled his blood.

[About the Author] William Hervey Allen, Jr., was born December 8, 1889 in Pittsburgh, Pennsylvania and died December 28, 1949 in Coconut Grove, Florida. He lived most of his life in Pittsburgh. His most widely read work, this epic novel Anthony Adverse, was one of the biggest bestsellers of the 1930s, its success only surpassed by Gone With the Wind Anthony Adverse is a historical novel set during the Napoleonic era, telling of a man's journey across life and several continents in search of a meaning to his life. Anthony Adverse was among the first American novels to be cross-promoted to the public through product tie-ins and other similar promotional devices. The screen rights were purchased by Warner Bros., which spared no expense in filming this blockbuster, starring Fredric March, Olivia de Havilland, and Claude Rains. The studio assigned as producer its most prodigiously talented executive, David O. Selznick, who broke the ground for his subsequent production of Gone With the Wind with this film; director Mervyn LeRoy turned it into a box-office hit starring Fredric March. The film, Anthony Adverse, was a 1936 American drama film directed by Mervyn LeRoy with the screenplay by Sheridan Gibney.