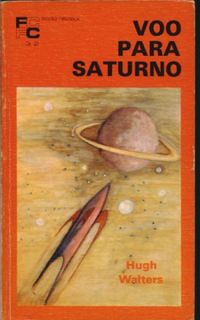 Spaceship to Saturn (1967) -- The tenth book in the Chris Godfrey of *U.N.E.X.A.* series -- A novel by Hugh Walters. Chris e a sua equipe vão hibernar durante a viagem até Saturno. Comparando com os livros anteriores, este é mais realista mas tem muito menos acção...
====
(*) United Nations EXploration Agency (UNEXA).
====
http://unexa.org/walters/10saturn/
UNEXA has decided to launch a ship to explore Saturn. However, as the length of the journey would prove unpleasant for the crew, it has been decided to use a new freezing technique, 'hypothermia'. It seems nonetheless that the mission must be cancelled due to a massive increase in meteor activity in the region of Saturn - radio is far too slow to allow the computer on Earth to manoeuvre the ship to avoid these meteors. The solution - instantaneous telepathy. It is found that Gill and Gail still communicate a carrier wave while under hypothermia, and telemetry can then be modulated on to this. A landing is attempted on Io, but problems occur and it turns out to be necessary to fly the ship through the Cassini division - a tiny gap in the rings of Saturn.....

Commentary: Another cracking good read. The hypothermia concept is covered in convincing detail in the early sections of the book, and went on to be used in all subsequent missions.