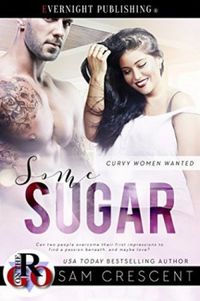 Faith Bryant has two problems. One, she cant stand her neighbor, and two, she cant stop thinking about him. Hunter Graham is sexy, sinful, and totally off-limits. For a year, hes played the main role in all of her fantasies. Only now, she doesnt want him there. After seeing a few womenand a couple of menleave his apartment crying, she knows hes a bad guy.

Then he even wants to borrow some of her sugar. How dare he?

All he wanted was a cup of sugar!

Hunter is a life coach. He breaks all the rules to help his clients any way that he can. When it comes to his beautiful, curvy neighbor, hes played the gentleman, even though he wants to do nothing more than fuck her.

Now he thinks shes a bitch, and she thinks hes a womanizer. When the truth is revealed, who will cave first? Can two people overcome their first impressions to find passion beneath, and maybe even love?