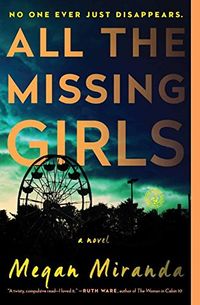 All the Missing Girls: A Novel Megan Miranda

All the Missing Girls: A Novel

Ten years after leaving Cooley Ridge, Nicolette Farrell returns to care for her ailing father. A decade ago, she, her brother Daniel, her boyfriend Tyler, and Corinne's boyfriend Jackson were suspects when Corinne--Nic's best friend-- disappeared without a trace. Within days of Nic's return, they are plunged into a shocking drama when Nic's neighbor Annaleise, who is dating Tyler and was the group's alibi ten years previously, goes missing. Told backwards from the time Annaleise disappears, the book follows Nic as she works to unravel the truth and, in the process, reveals shocking realities about her friends, her family, and what really happened to Corinne that night ten years ago.