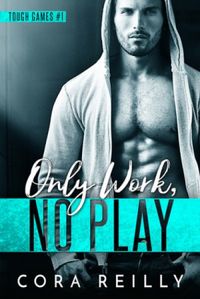 Only Work, No Play

After two years of taking care of her heartbroken father, Evie needs a new start. Leaving the States and following her sister to Australia to work as the personal assistant of rugby star Xavier  The Beast  Stevens seems like the right kind of distraction.
Tall, muscled and devilishly handsome, Xavier is the lov em and leav em kind of guy. He never forgets a girls name because he never bothers to remember it in the first place.
Evie soon realizes that being Xaviers assistant is a 24/7 job; the man seems unwilling to even set an alarm for himself.
As she watches him move from one woman to the next, Evie is glad that her heart is safe from his attention. After all, shes a far cry from the size zero models he usually takes to his bed.
But soon being around Xavier doesnt feel like a job, and seeing him walk around his apartment half naked all the time isnt helping either. Evie knows that giving in to her attraction will lead to heartbreak, but when Xavier starts treating her as more than just his assistant, resisting his charms seems like an impossible task.

Resenhas para Only Work, No Play (9)