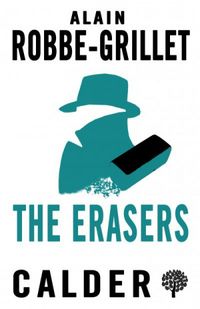 After a failed attempt on his life by an unknown terrorist cell, Professor Daniel Dupont decides to fake his own death. The government authorities, believing that the attack is part of a series of political assassinations, send Wallas, a recently promoted special investigator, to the provincial town where the crime took place. As he wanders the confusing streets of the town, he finds himself increasingly lost in a web of conspiracies, doppelgängers and memories.

Cleverly deconstructing the detective genre, The Erasers, Alain Robbe-Grillets first published novel, shifts between various characters and time frames, while maintaining the suspense of a conventional thriller. The result is an engrossing examination of consciousness and reality which is also one the founding texts of the nouveau roman school.