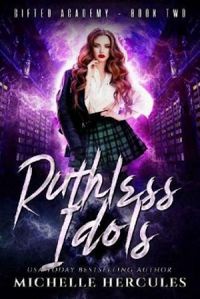 I knew being the only Norm at Gifted Academy would be hard and dangerous, but I didnt expect to be tossed out of a window. Also didnt expect to be saved by one of the Magnificent Four.
Bryce brought me back from the brink of death, but he did more than heal my broken bones. He weakened my defenses and carved a place in my heart.
Hes not the only one vying for my attention. Rufio, Phoenix, and Morpheus have all changed their attitudes toward me, and recklessly, I want to know where it will lead.
But a complicated romance with four ruthless Idols should be the least of my worries. Powerful players are closing in, getting ready to either use or destroy me. I dont know which one is worse.